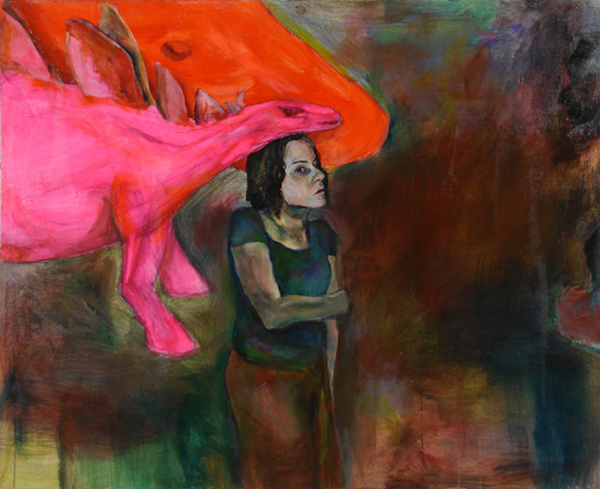 In an ice cream soda mountain paradise, a pink dinosaur once lived, distant and rare. At daybreak the sugared tide would roll out onto the beach like an overflowing cup of Italian cream soda. It trickled down the hill, collecting into an aromatic stream tasting of raspberries. It was a beautiful and decadent beverage, a fruity chic drink in a bar that you are too shy to ask about and are sure you can’t afford anyway. 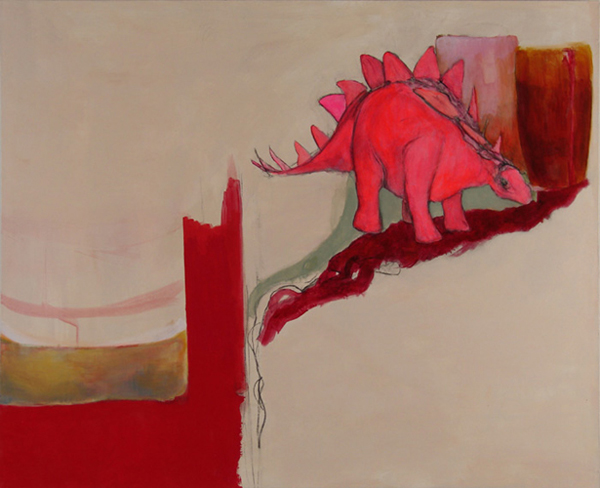 The river water was alive like yogurt, made up of microscopic bacteria. At night the tide would draw back in and only a small portion of the plush beach would retain the raspberry magic. Little fishes left behind by the ebb and flow of the river would sputter and die on the empty beach, their syrup sticky bodies left wasted on the ground.

The dinosaur stood majestically at the top of a lush carbonated waterfall. It looked delicate with its soft, clawless legs and dull teeth that could only bite through plants. But a combative row of plates along its back warned onlookers from drawing too near. 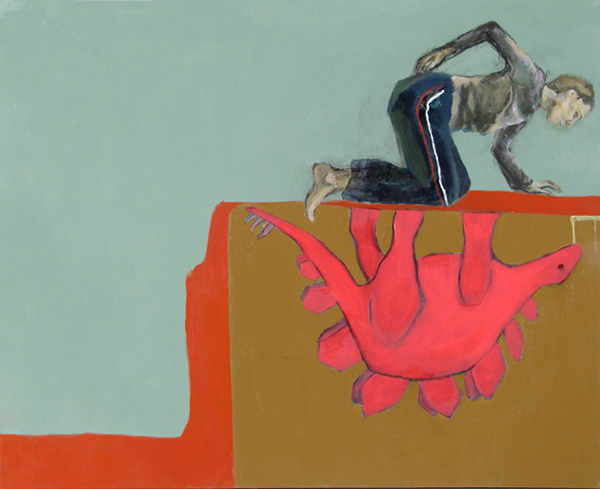 In a midnight insomnia full of self-doubt, I went to the place the dinosaur had appeared. The air was cold like a misty early morning commute. Deep in the mountains, the overhead clouds cast reflections into still sugared glasses along the skyline. I tried to track the stegosaurus footprints in the sand. Surely if I walked past the dinosaur it would recognize me and allow me entry into its secret and lonely world. Everything was still, the raspberry liquid suspended and motionless. The dinosaur had vanished, an apparition, and a sour, detergent smell seeped across the valley. 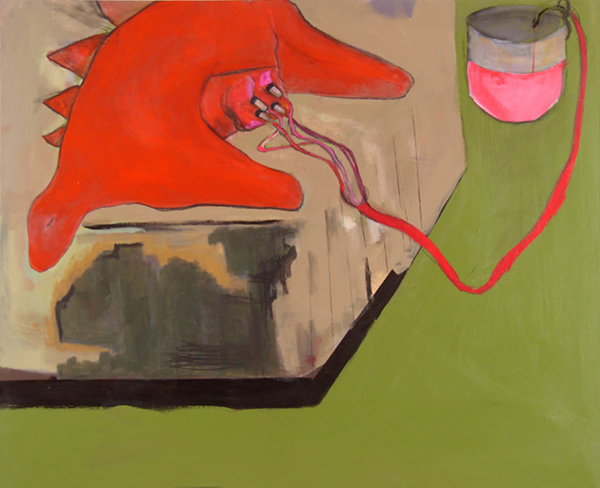 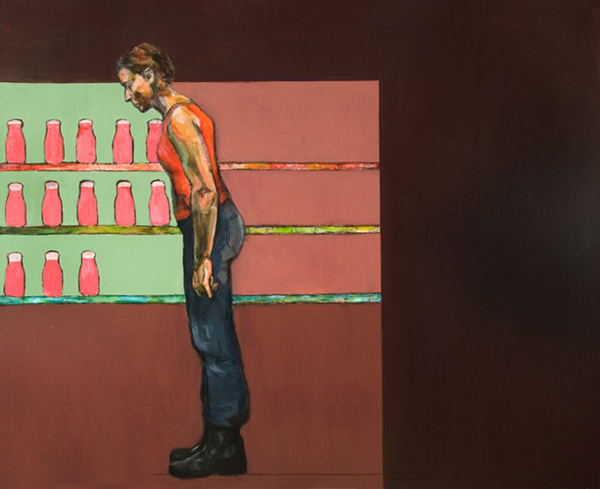 I went to an anonymous florescent store to buy a bottle of pink milk, which had been drawn from the stegosaurus in its sleep. I ducked quickly past the cashier, hating to have to talk and interrupt my private purpose. The milk was in a pristine retail arrangement of order and simplicity. I plucked a chilled pink bottle from the display, touching the condensation on the glass. 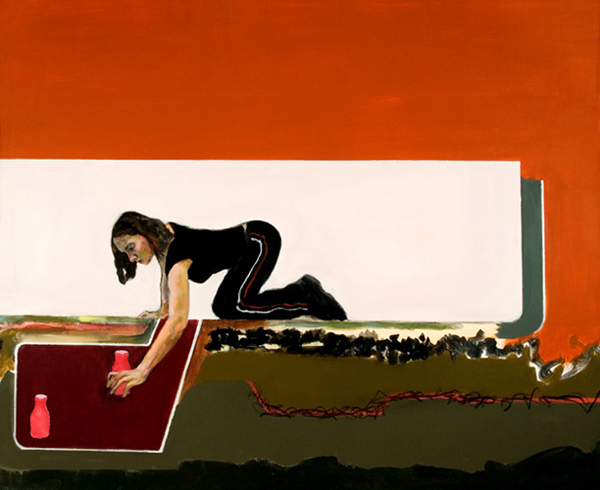 One bottle at a time, I hoarded the milk in a secret underground tunnel. 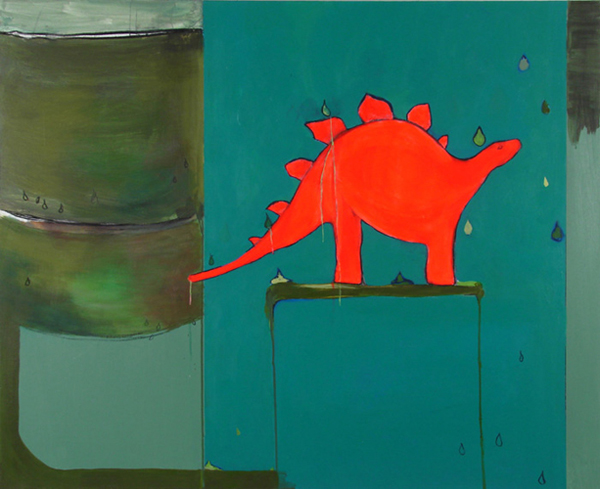 The night it started to rain, it seemed that acidic bile was falling from the sky in giant pungent droplets. Acid rain contaminated the soda fountain river with greenish muck. The stegosaurus stood precariously on the edge of a platform with nowhere to escape as the bile encroached. The bulbous acid droplets pelted the dinosaur, eating into its skin with a caustic sizzle. 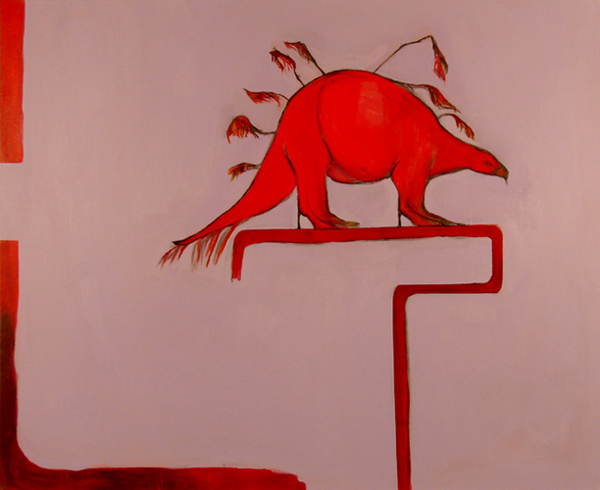 The dinosaur was rumored to have escaped by evolving into a bird, becoming something ordinary that could slip away undetected. The stegosaurus-bird could only look out from above the mutated ruins of the soda mountain paradise. The sun came out, filtered purple through the polluted atmosphere, and illuminated a world blank and new. 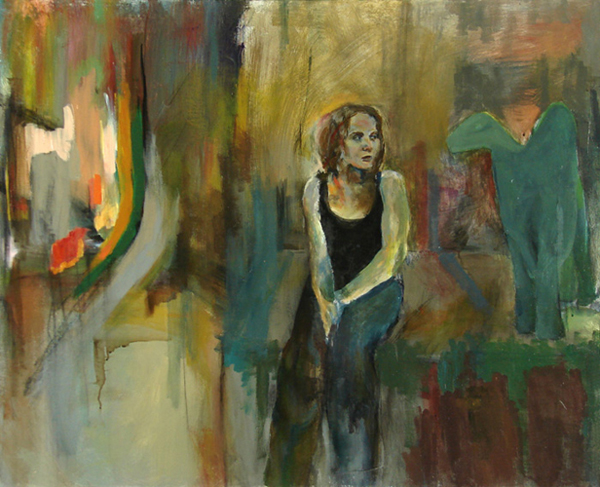 With no dinosaur to draw milk from, the retail pink bottles were discontinued. My tunnel shelter was forever incomplete, an aborted connection to the dinosaur that disappeared. I met a small scavenger reptile at the hazy barrier that blocked the hazardous wasteland. It was an underground dweller that had emerged from beneath the soda mountain. Our tentative friendship was special to me, a secret link to the extinct world I had never been able to fully enter.

2007 Future/Now, The Frist Center for the Visual Arts, Nashville, TN